It’s risky. It’s painful. It’s messy.  It may even cost you more out-of-pocket. Why, then, are some people choosing to forego the safety and convenience of a hospital birth and opting instead to labor without pain meds in a birthing center or at home?  And why did I eventually choose this option for myself?

END_OF_DOCUMENT_TOKEN_TO_BE_REPLACED 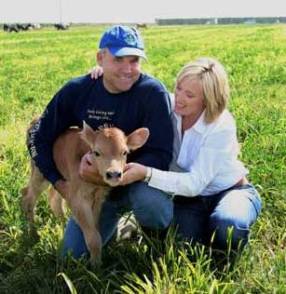 Real, unadulterated, whole, raw milk. People have consumed this versatile, satisfying and nutritious food for thousands of years. That is, up until about 100 years ago, when it fell out of favor and was replaced by the highly processed and allergenic alternative that is found in today’s supermarkets. Although it’s growing again in popularity, raw milk and its producers are mistrusted by government officials, the mainstream media and the vast majority Americans.  Several raw milk dairies in America have recently closed their doors due to the intense scrutiny and harassment they’ve endured from state health departments. But Mark McAfee, head of America’s largest retail raw milk producer, is far from letting anyone get in the way of pursuing his dream of improving the health of this country by providing informed consumers with access to “mother nature’s perfect food.”

In this interview, Mark gives me the inside scoop on the very public pathogen outbreaks that have been associated with his dairy. He answers the hotly debated question of whether humans should be consuming the milk of another species. He talks about government corruption. And he tells me about a new enterprise he has launched, which aims to bring greater transparency and standardization to raw milk production. END_OF_DOCUMENT_TOKEN_TO_BE_REPLACED

I’m embarrassed to admit it, but I have an underarm sweat and odor problem. I can’t tell you how many nice tops I’ve had to throw out because of sweat stains that I could never wash out. Finally I went to an endocrinologist and he diagnosed me with Hyperhidrosis. That’s medical lingo for sweating a lot. He went over various options, like prescription-strength antiperspirants and even surgery! But one of his recommendations combined with something else I discovered has been quite effective, so I thought I’d share the solution that has worked well for me. END_OF_DOCUMENT_TOKEN_TO_BE_REPLACED

Do you get flu shots? Is your tetanus shot up-to-date? Should you give all of the recommended vaccinations to your children? 98% of doctors will probably tell you yes. End of story. Did you even know that this was a controversial topic? I didn’t. At least not until a few weeks ago, when Frontline: The Vaccine War showed up in our Netflix queue. END_OF_DOCUMENT_TOKEN_TO_BE_REPLACED

Ever meet a farmer who opposes farm subsidies? Or a Christian who’s against donating food to developing countries? Or an environmentalist who believes we have too many trees in the US?  How about a forward-thinking innovator who wants to do away with sewage plumbing and go back to a hole in the ground? What if all of this described one person, and that person had the nerve to publish a book accusing everyone else of not being normal?

END_OF_DOCUMENT_TOKEN_TO_BE_REPLACED

There have been a rash of studies over the past weeks that cast doubt on whether nutritional supplements are safe and effective.  END_OF_DOCUMENT_TOKEN_TO_BE_REPLACED